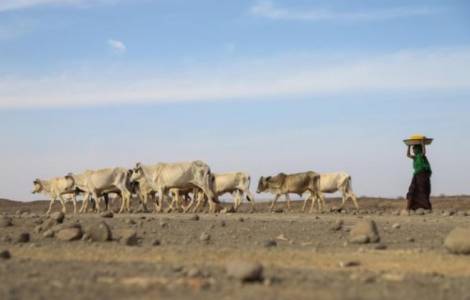 
Ginir (Agency Fid hospital, in the eastern region of Bale in Ethiopia, affected by a severe drought with Oromia, the Somali region, the southern nations and the southwest. Local media reports that the population of these regions has just recover from the drought of 2017 and if rainfall is forecast for March-April 2022 remains below average, a fourth consecutive dry season will worsen the situation. Political factors, such as insufficient government response, civil war in northern Ethiopia (see Fides 18/1/2022) and instability in other regions, have exacerbated According to the local commission on disasters and displacements, in Oromia, more than 800,244 people in eight areas of the region are currently facing starvation and severe draught.Among the main victims are children who are currently suffering or at risk of suffering from severe acute malnutrition in the coming months. rain showers have led to malnutrition, including the loss of livestock. Projections by the United Nations Office for the Coordination of Humanitarian Affairs (UNOCHA) indicate that more than 6.8 million people are affected. In the Oromia and Somali region, approximately 225,000 children suffer from malnutrition and more than 100,000 pregnant and breastfeeding women need nutritional support.
As most of the region’s population lives on livestock, the consequences of the drought, such as the drying up of pastures and the depletion of water resources, have seriously aggravated the current food insecurity. In January 2022 alone, around 260,000 head of cattle died in South Oromia, Somali Region and Southern Region. Another two million head of cattle are at risk, which has also led to a collapse in market value as emaciated animals are not marketable. The federal administration provided humanitarian aid to avert an immediate disaster. As a long-term goal, it seems that the government plans to launch several water supply projects to avoid future droughts. (GF/AP) (Agenzia Fides, 02/21/2022)