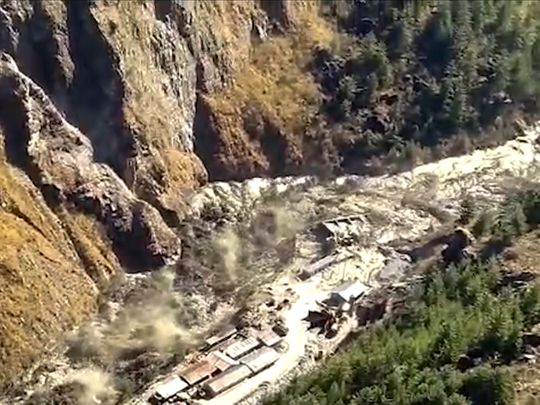 Three seemingly unrelated natural disasters have hit our world in the past few days.

On February 7, an avalanche hit Chamoli district, Uttarakhand. He destroyed two water power projects, killing several people and the entire area covered in slush and mud. Two Himalayan rivers, the Rishiganga and the Dhauliganga, flow down from the snow-capped mountains.

There, a huge chunk of glacial rock, more than half a kilometer long according to satellite images, broke off the top of the mountain.

Speeding down two kilometers, it crashed with a huge explosion. Like a huge bomb explosion, it raised high clouds of mud, debris and spray. The inhabitants of this idyllic cove were blinded and stunned by the deafening boom. Slurry fell on the plains – ice, stone, sand and water devastated everything in its path.

Trapped in the tunnel

While the villagers on the mountain slopes were miraculously rescued, 9 kilometers below, the workers working at the 520 MW Tapovan-Vishnugadh hydroelectric power station were unlucky. Many were trapped in the Tapovan tunnel, intended to channel and regulate the waters of Dhauliganga.

Completely damned by the mud, the tunnel has literally become a dead end. Despite the best excavation and rescue efforts by the government, army and paramilitary forces, the death toll was over 60.

As Jacob Koshy writes in Hindu commentaries, “with the great challenges of organizing hydroelectric crops in the Himalayan region, the dangers of sheer calamities and the declining value of solar energy, there is There are in fact doubts about the way forward for hydropower crops and their viability as a substitute for fossil fuel-based sources of vitality.

Earlier, in 2013, flash floods in the state claimed many lives. The Chamoli disaster, once again, underlines the fragility of the Himalayan ecosystem, so sensitive to earthquakes, floods and landslides.

Living in Shimla, the largest hill station in the world, I see construction, road widening and economic development all around me. Tens of thousands of tourists flock to the hills on weekends, clogging roads, depleting the city’s water supply and dumping their trash here and there.

The picturesque colonial summer capital, designed for 45,000 souls, now has three quarters of a million inhabitants, plus the throng of greedy and newly wealthy city dwellers of the plains.

Eager to escape the dust and pollution of their massive settlements, they flock to the cooler climates of the hills, putting additional pressure on the already fragile environment.

What’s the exit? Economic activity, development and growth cannot be completely stopped. Mountains also cannot be closed or isolated from travelers and tourists.

Travel to Texas, United States. As someone who has lived there, I know how hot summers can be. Austin, the state capital, often registers over 40 degrees centigrade during its warmer months. No wonder the world’s first centrally air-conditioned building was the Milam Building in San Antonio, Texas, in 1928.

How come a snowstorm in Texas on February 17 left more than 3 million homes and offices without power? Outside of the freezing cold, many parts of the United States, the richest and most powerful nation in the world, did not even have access to clean drinking water.

Nearly fifty deaths are linked to the snowstorm and the ensuing blackout. Little Rock, Arkansas, for example, was inundated with 15 inches of snow, the highest in over a hundred years. It’s still cold in Texas, and Gov. Gret Abbott has warned residents that “we are not out of the woods.”

On the other side of the world, just days ago, the Indonesian capital, Jakarta, faced severe monsoon flooding. More than 1,000 residents had to abandon their homes to escape. Photos of people wading up to their necks in the water, with their personal belongings on their shoulders or heads, circulated in global media.

In the east of the city, the waters reached nearly six feet in the streets, requiring emergency evacuation measures. The governor of Jakarta, Anies Baswedan, admitted on Saturday February 19 that “200 neighborhoods were affected”.

Speaking to Reuters, Dwikorita Karnawati, head of the Indonesian Meteorological Agency (BMKG), warned of more heavy rains in the coming days: “These are critical times that we need to be aware of.”

Precisely. These are critical times. These seemingly unrelated “acts of God” are actually part of a larger movement of ecological instability and imbalance, what Amitav Ghosh called The Great Disturbance: Climate Change and the Unthinkable (2016).

Overpopulation, overexploitation of natural resources, overproduction and overconsumption have negatively affected our habitat. Our beautiful and generous Earth Mother is, so to speak, groaning in distress because of our recklessness and insensitivity.

The triple economic, energy and environmental crises afflict our entire world, north and south, east and west, rich and poor.

Climate evangelism, attacks on governments and businesses, polemics or politics that divide socially and economically are not the way to go.

In such moments, human solidarity and partnership are necessary. Wisdom and compassion must marry science and technology to produce a new global era of cooperation and collaboration. Together we can do it, but apart we will fail.

The world is in dire need of a revolution of consciousness, such as it will save us and our planet. We must each play our part, however small or insignificant it may be.