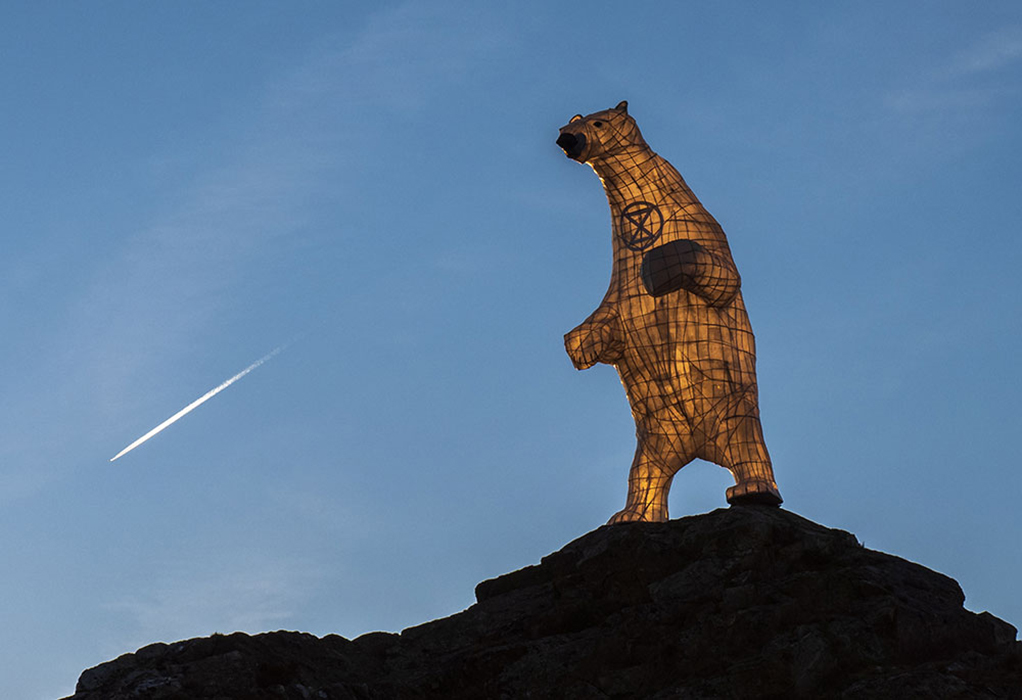 It may not be obvious, but art pollutes. To such an extent, in fact, that its carbon footprint has become a real concern for artists and professionals in the field. Many decided to take up the issue at the 26th United Nations Climate Change Conference (COP26) in Glasgow.

Take Icelandic-Danish artist Olafur Eliasson, for example. According to The arts journal, this artist is set to present a film with South African environmental activist Kumi Naidoo, exploring how the worlds of art and activism can work together to address the climate crisis. “What is needed right now is a new lens through which to look at old problems – problems our generation simply has not been able to solve with the intensity and urgency that they had. need, “Naidoo told the trade publication.

Other artists, like Robert Montgomery, make similar remarks, presenting works expressing their ecological commitment at the United Nations Conference on Climate Change. The Scottish artist and poet is currently exhibiting the installation ‘Grace of the Sun’ at the Landing Hub, a temporary space created for COP26 by Glasgow City Council. The installation takes the form of a giant poem, which lights up every day at sunset. It also happens to be powered by a thousand Little Sun Diamond solar lights, developed by Olafur Eliasson and engineer Frederik Ottesen as part of the Little Sun Project.

If cinema and music have been in tune with ecological issues for decades, the visual arts have been slower to take hold. Some works, such as “7000 Eichen” by Joseph Beuys, testify to a certain environmental awareness in the 1970s and 1980s. Here, the artist took advantage of his last participation in the Documenta contemporary art exhibition in Kassel in 1982 to propose the planting of 7,000 oaks in the vicinity of the German city. This long-term reforestation project aimed to remedy the damage caused by excessive urbanization.

Since then, the art world has become increasingly involved in the protection of the environment. Indeed, the association Art of Change 21 has made it its mission, by actively promoting for six years the link between contemporary art and the major issues linked to climate change. The association recently launched the ART-CLIMATE-COP26 program to underline “the need to include creative and imaginative actors and to allow an emotional response to the issues”, explains Alice Audouin, president and founder of Art for Change 21.

On November 5 and 6, John Gerrard showed one of his latest creations, titled “Flare (Oceania)” on the south facade of the University of Glasgow. This monumental work, which follows on from his famous “Western Flag”, evokes the link between climate change and the ocean. Meanwhile, Lucy Orta – from the duo Lucy + Jorge Orta – will present the social sculpture “Nexus Architecture COP26”. Fifty students from the Glasgow School of Art and the University of the Arts in London will participate by simultaneously personalizing Nexus Architecture blank canvases, creating “an interconnected chain of solidarity from Glasgow to London”.

So what was this trip all about? “Our goal is to come together to walk, talk, connect with each other and connect with the landscape by moving slowly through it,” Bamber Hawes writes online. Adding that: “Walking to climate talks won’t change the world – but I can’t think of anything better to do to show the seriousness of my belief that we need to learn to talk together and build community, this it is only in Unity that we will make a better and more just world.