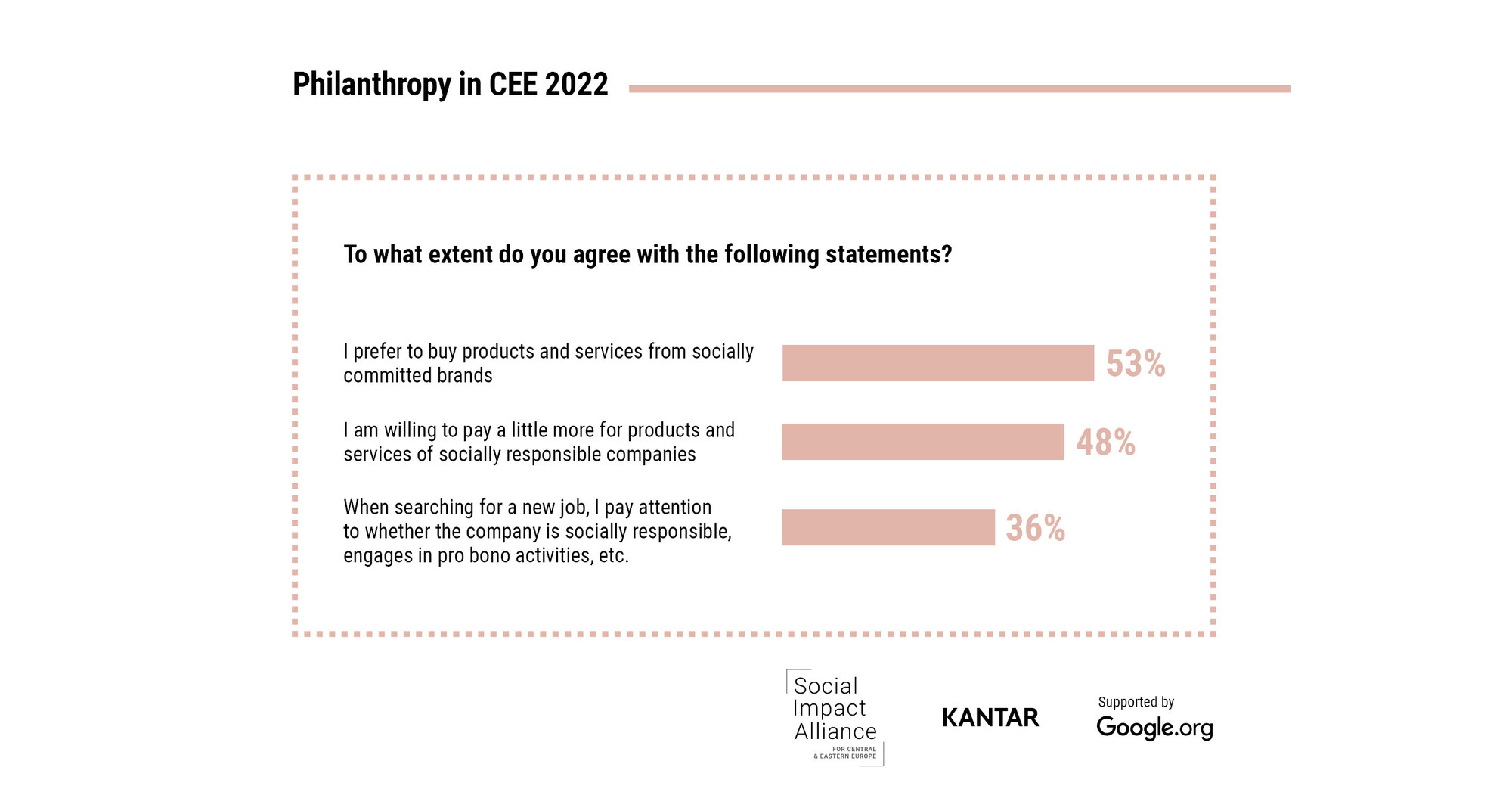 Measures taken by the public administration are necessary to create a favorable legal and fiscal environment, but this is the companies that are the most important driving force when it comes to solving social problems. The data collected from the citizens of Bulgaria, Croatia, Estonia, Lithuania, Latvia, Romaniaand Slovenia between March and April 2022 shows that CEE citizens appreciate socially engaged companies, but in return they expect transparency, honesty and the association of social activities with the business profile of the company.

Not only customers, but also employees want to contribute to the growth of responsible companies. The social activity of potential employers is important to 36% of people looking for a new job. Employee volunteering is becoming an important trend, but only 20% of CEE citizens say their employer offers them this opportunity. At the same time, almost 40% of those who do not have this option say they are interested. – Explain Anna Korzeniewska of Social Impact Alliance for Central & Eastern Europe, an international think tank that conducted the study. A similar situation can be observed for pro-bono activities. Only 14% of respondents say their employers provide pro bono support as part of their business, while 46% expect this to change.

When asked which United Nations Sustainable Development Goals (SDGs) should be addressed by particular industries, CEE citizens indicate that the financial sector should solve problems related to poverty, education and economic growth. Food companies and distribution chains should put more emphasis on the fight against hunger and the promotion of responsible consumption. Technology and IT businesses must support innovation and economic growth, while energy and automotive industries should focus on climate-related issues.

Access to knowledge and education was indicated as one of the most important needs of the region. It turns out that only 11% of CEEC citizens understand what ESG (Environment, Social, Governance) represented. For most citizens, philanthropy is part of financial education and should be promoted by banks. According to the majority, social engagement should be taught from an early age.

2022 survey and a similar survey conducted in 2020 in PolandCzech Republic., Slovakiaand Hungary clearly show that crises such as Covid-19 pandemic and the war in Ukraine mobilize Europeans to become socially involved. No less than 53% of CEE citizens joined efforts to support Ukrainian refugees, mainly by providing financial support and donating goods. As the year 2021 has shown, the biggest challenge will be to maintain this commitment. It should be noted that expectations of more developed countries have increased. A greater commitment is expected in particular from the countries of Western Europe (Germany, SwissUnited Kingdom) and North America (UNITED STATES, Canada).

Currently, nearly half of CEE citizens (48%) donate financially, regardless of age, gender, place of residence or income. The total value of annual donations in the 7 countries studied amounts to almost one billion eurosbut their the philanthropic potential is twice as high. – This scale of engagement is possible, but to strengthen the ecosystem of social impact in Central and Eastern European countries, we need to raise awareness, initiate more cooperation, identify and eliminate obstacles, also fiscal and legal. – Remarks Anna Korzeniewska.

Developing sustainable philanthropy requires reliable data and knowledge sharing. central and Eastern Europe, thanks to the growing potential of its society, has a real opportunity to continue to build a culture of philanthropy and sustainable social attitudes. This is why it is important to invest in research to engage all actors in society in a strategic and long-term way. – said Liza BelozerovaSenior Manager at Google.org, Europe, Middle East & Africa.

Our Initiatives – Philanthropy in CEE 2022