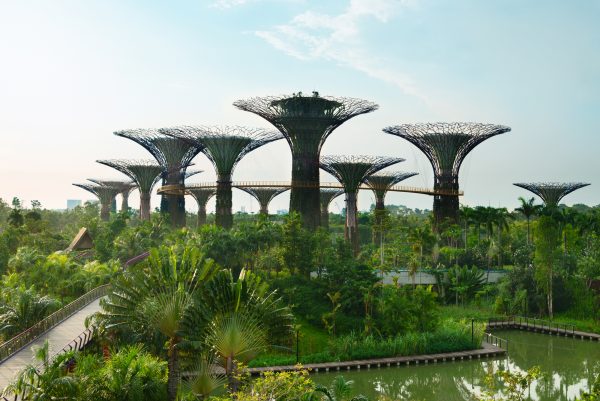 The first version of the bloc’s classification system would facilitate investments in environmentally sustainable activities, but human rights are not yet on the table.

Gardens by the Bay, Singapore with an artificial grove of supertrees as a vertical garden.

But while the original proposal adopts international best practice on environmental topics like climate change, it lacks a key requirement found in other major sustainability taxonomies: respect for human rights.

Both public and private sector stakeholders view classification systems such as the ASEAN Taxonomy as fundamental tools for achieving long-term sustainability agendas. These systems define the criteria for determining whether an activity supports a range of sustainability goals, from tackling pollution and deforestation to meeting international labor standards. Clear measures and thresholds, such as a maximum amount of greenhouse gas emissions per unit of production, are often used to quantify the extent to which an activity can be considered sustainable. Globally, more than 25 jurisdictions and numerous non-governmental organizations are developing or have already finalized sustainability taxonomies.

For governments and regulators, taxonomies can help identify targets for future policy initiatives, such as subsidies for clean energy projects or taxes on carbon-emitting activities. In the private sector, taxonomies can inform companies’ sustainable business strategies and help investors direct capital to sustainable projects. The potential for facilitating sustainable investments is particularly relevant in ASEAN where, according to the Monetary Authority of Singapore, around $200 billion in green investments will be needed every year until 2030.

Get notified with the story of the week and develop stories to watch across Asia-Pacific.

The ASEAN Taxonomy aims to bring these benefits to Southeast Asia within a framework generally aligned with the most developed and influential sustainability taxonomy in the world, the European Union Taxonomy Regulation. In the ASEAN framework, an economic activity is sustainable if it contributes to at least one of the four environmental objectives drawn from the EU taxonomy: climate change mitigation, climate change adaptation, protection of a healthy ecosystem and biodiversity, and promotion of resource resilience. and the transition to a circular economy.

It is in the concept of minimum safeguards that the ASEAN taxonomy diverges significantly from the EU taxonomy. Where the ASEAN taxonomy would only require respect for environmental laws, the EU taxonomy instead recognizes “the relevance of international minimum human and labor rights and standards” in the environmental context and concludes that social safeguards â€œshould be a condition for economic activities to qualify as environmentally sustainableâ€. Accordingly, Article 18 of the EU taxonomy requires that all sustainable economic activities comply with international human rights standards, including the UN Guiding Principles on Business and Human Rights. man and the International Bill of Human Rights.

The lack of human rights protection is particularly marked in Southeast Asia, where the risks of forced labor are greater than in many other parts of the world. ASEAN member states, including Myanmar, Cambodia, the Philippines and Laos, rank relatively high in terms of vulnerability to modern slavery, including forced labor, according to the Global Slavery Index 2018. These risks may be heightened in the manufacturing and agricultural sectors, which are among the six identified by the ATB for priority attention as the ASEAN taxonomy develops. Without minimum social guarantees requiring respect for human rights and labor standards, the ASEAN taxonomy risks not only prioritizing environmental criteria over human well-being, but also failing to align with other state-of-the-art systems, such as the EU taxonomy, which could discourage international investment.

While the ATB may embed human rights protections in future iterations of the ASEAN taxonomy, there are early indications that ASEAN member states will address the topic in their own national taxonomies of sustainability, which will accompany the ASEAN taxonomy. Last year, Singapore proposed a national green finance taxonomy that would require sustainable economic activities to have “no negative impact on the social and economic well-being of communities”. This proposal makes explicit reference to the UN Guiding Principles on Business and Human Rights and other international human rights standards.

In Malaysia, a climate change taxonomy finalized in May “strongly encourages” financial institutions to assess, as part of their lending or investment activities, whether companies respect Malaysian human rights and labor laws. and the UN Guiding Principles. If the ATB ultimately leaves human rights outside the ASEAN taxonomy for individual ASEAN member states to deal with, these national systems could, when read in conjunction with the ASEAN taxonomy ‘ASEAN, form a more comprehensive sustainable finance classification system that addresses the full range of sustainability challenges in Southeast Asia.