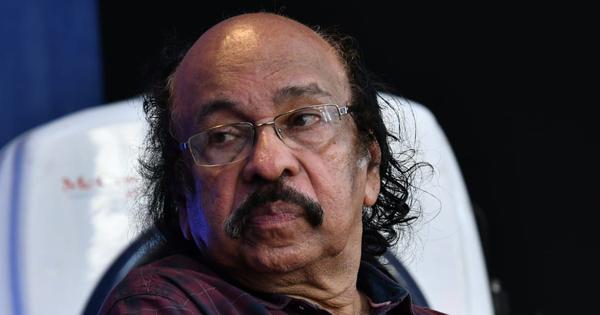 It is often claimed that poetry can be both abstract and necessary. But it is the language, sober and inventive, which seeps through its defenses. Questions from the Dea‘, K Satchidanandan’s latest collection of poems, is about decentering the subject, unmasking authority and seeking kinship with nature to elicit a deep emotional response in a surprisingly moving way.

To read it is to encounter reality and its undulating terrain steeped in pain. Frank and laconic, the poems of Satchidanandan tell the truth, they are not a source of comfort. This fascinating collection explores in particular the ecological balance – intellectually severe, exposed, and yet never bound by doctrine and belief – posing troubling questions.

Here, the poet’s voice is biocentric, lively and passionate. And the emotional depth of the collection comes from working with the conventional narrative structure. We find unmistakable integrity, a thirst for knowledge and a language taken seriously. Satchidanandan is a defining poet of our time, and his visionary poetry, self-translated into English from Malayalam, crosses the boundaries between truth and reverie, light and shadow, augmenting his powerful words with sublimity and verve.

Questions of the Dead courts risk both in method and in process. The German critic Wolfgang Kubin rightly remarked: “K Satchidanandan is certainly not a poet who stands aloof from the world. He is a traveling poet. Poetry for him is a cry against all walls… It is his cosmopolitanism that makes Satchidanandan interesting beyond India.

What stands out in this collection is the poet’s love for the people and his concern for environmental degradation. Its short and declarative lines encourage reflection, even learning. The poet paints an urgent, often surreal portrait of the inequalities of life. The dissonance between the windy rhetoric of modern times and the harsh realities of the world with their acceptance of darkness are reflected in lines such as these:

Yakshis live on palm trees
Human beings live in houses
Those who live on the streets
are not human.

His poems are symphonic and moving, seeking to intimately grasp the entirety of human life and time. Like their subject matter, the poems are dark, yet sharp and insightful, sometimes all at once. They are anchored in the realms of nature and of men. The disconnection between man and nature is a threat to life and identity.

This time we won’t argue
I’ll trade my fruit for your song
There will be no humans
To see or to hear.
butterflies,
Only butterflies.

For Satchidanandan, poetry has always been the place where he sought understanding and answers that he could not find elsewhere. In one of his recent collections of poems on love and desire, The Whispering Treehe wrote, “How a sheet turns into / Vatsyayana in a single night / Love too is meditation / in twenty-four postures.

In this collection, he combines extraordinary literary lucidity with a visionary gaze that always questions reality without transforming or overthrowing it, and meditates on its constantly changing methods, the tensions buried within it.

No one keeps asking questions
just because we died

The poet is more assured than haughty, not adept at hyperbole. His poems address the core, the mantle, the crust, the bone and the fossil as well.

The one without ‘I’
To know each other
The one who doesn’t know ‘you’
knows the others.

For all the subtleties, there is urgency in tone and texture. The lines that follow are visually and aurally effective as the poet describes the brutality of humans, emphasizing that nature is a victim, not shrouded in beauty and romance.

I need an urgent operation
So I can breathe the present

This alternation between the sharp essential and the substance, between the point and the wood, between the response and the withdrawal, creates a constant uncertainty in our mind. The poems reflect the cue with stark, apocalyptic precision.

‘Your eyes carry no rage, but a winter
Your perched lips no longer have a slogan
Your bare hands hold no weapons but an autumn
The world does not change.

— “The world does not change”.

Satchidandan weaves these narrative themes, images and viewpoints together in this collection. His poems are always about returning to everyday life. The climate crisis is a failure of our system and, confessing to being baffled by humanity, the poems ring ominous echoes of environmental destruction. The sense of flux and disorientation is powerfully conveyed, using the non-human as the agent:

Before taking over,
The Earth was ruled by humans.
They had flesh, blood and bones.
They thought they were sad
They laughed, sang and even wrote books.
One day, humans, using their intelligence,
Killed each other,
Leaving us the earth.

Moving deftly between sensitivity and exasperation, expectation and anguish, cheer and dirge, it’s an intensely haunting collection that will linger in the reader’s mind. They are essential, finely crafted poems that position us as prisoners of evil plans.

The bullets you consumed
have rusted in your belly
and stained the color of your blood.

Civilization seems
as virgin as a dry river
who does not thirst for rain.

“No one talks about you, Syria.”

Satchidanandan explores in his poems the impact of extreme weather conditions on humanity as if embedded in his genetic code and challenging our innate anthropocentrism. And his subtle connection to nature and people comes out to appealing effect in his dexterous writing, in which the poet employs a diverse mix of styles and techniques.

I want to die, without
leaving a single imprint,
leaving only a few poems
which do not bear the name of the poet:
like our ancestral people.
Ruminations

The language is austere, the images attractive, the method immaculate. Austerity tastefully evokes everyday life. The poet looks back on pain and looks toward redemption, even as he struggles with the slippery nature of truth and misery.

Then I walked towards the light
I saw in front of me
but never abandoned my cart.
This light was a will of the will-o’-the-wisp.
My wheel took me to a new place
before being lost in the abyss.

The dichotomy of union with and disunion with what is fundamental and restorative is already present in this collection. Satchidanandan’s vision is a cosmic vision, which seeks to embrace global continuities within which significant disturbances take place. Seeing this climatic apocalypse, he skilfully reorganizes the questions of humanity’s alienation from the environment, questions that have remained unanswered for years.

Satchidanandan moves naturally and exhilaratingly from the personal to the political, and his poems find a voice without relying on a rigid framework. A sense of environment and people anchors this volume. And with laconic lines and a formal game, the poems here give equal space to rage and tenderness. This warm and expansive volume illustrates that poetry is for Satchidanandan a practice of daily deliverance – a form of sacramentalism.

Gopal Lahiri is a bilingual poet, writer, editor, critic and translator and has published in Bengali and English.