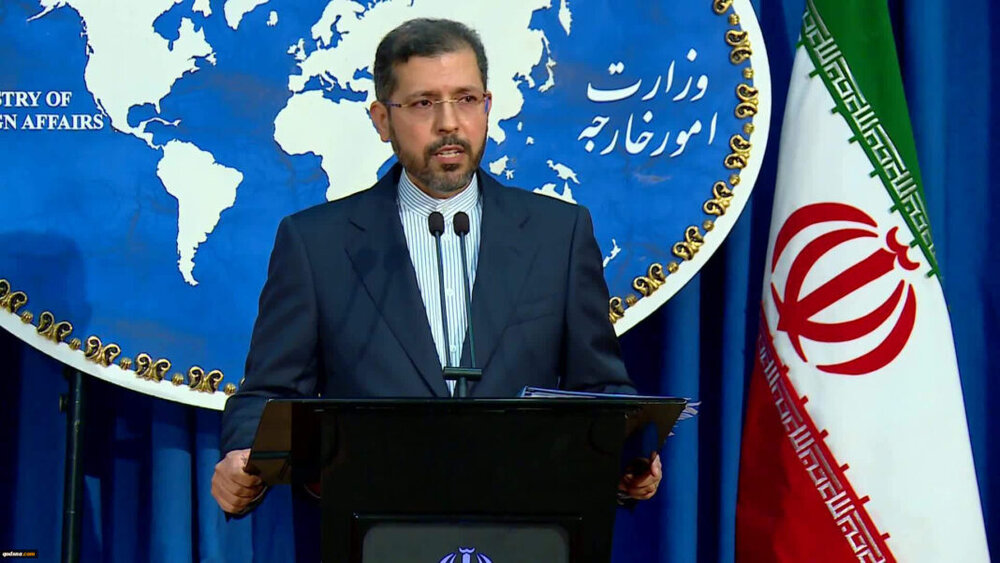 At the beginning, he commemorated the epic anniversary of the liberation of the border town of Khorramshahr on May 24, 1982, which had been captured by the invading army of Saddam Hussein in 1980. He also presented his condolences on the martyrdom of the glorious martyr Sayyad Khodaei to his fellow martyrs. , the Islamic Revolutionary Guard Corps and the grieving people of Iran.

In response to a question about the actions of the Ministry of Foreign Affairs regarding the President’s order to resolve the dust storm crisis through diplomacy and international institutes, as well as interaction with neighboring countries, the spokesperson said said in the past two months, with the onset and intensification of dust storms, the Ministry of Foreign Affairs has put cooperation with neighbors on the agenda in order to expand regional cooperation and finally put implement regional arrangements to deal with the crisis.

He added: “We have started this cooperation with Iraq and we intend to encourage Syria and other countries in the region to cooperate on these regional arrangements in the next step. In this context, it was suggested to the Iraqi side to welcome the Iranian delegation in the form of bilateral cooperation to control sand and dust storm (SDS) hot spots, or to send an Iraqi delegation to our country to pave the way for cooperation between the two countries in the field of environmental issues, including the fight against dust and sandstorms.

Khatibzadeh added that regarding the pursuit of the case through international channels, the Ministry of Foreign Affairs has drafted and approved resolutions in recent years at the United Nations General Assembly, the United Nations Program for the Environment (UNEP), the Organization of Islamic Cooperation (OIC) and other international institutions.
According to the spokesperson, these resolutions focused specifically on the issue of dust storms and the need for regional cooperation to tackle all environmental issues, including sand and dust storms.

“Therefore, the international rhetoric on this issue has been formed by consensus with the efforts of the Ministry of Foreign Affairs in international organizations for several years,” he added, stressing that by creating convergence between countries of the region, there is hope that in the medium term, a number of regional arrangements can be concluded to deal with the problems of dust and sandstorms within the framework of cooperation and participation of the countries of the region.

Khatibzadeh noted that on the national scene, the ministry actively participates in the meetings of the National Headquarters for Sand and Dust Storm Mitigation, which is headed by the Ministry of Environment, and other institutions related to the issue. dust.

In response to a question about the recent Israeli airstrikes on positions in Syria, the spokesperson said that regrettably the international community’s indifference to the Israeli regime’s repeated aggressions against the Syrian Arab Republic and the flagrant violation of all international laws and regulations have made the leaders of this regime more emboldened and unbridled.

“There is no doubt that the overt and covert support of the ruling regime in the United States of America has played a significant role in increasing the audacity and insolence of this regime of occupation, not only continuing to occupy the Syrian Golan Heights, but also on several occasions. attack the Syrian government and people,” he added.

“According to the news we have received, during the recent attack by the Zionist regime, the parking lot of public vehicles in the city of Zeinabieh and near the holy shrine of Hazrat Zeinab (PBUH) was targeted by a missile, which caused damage to the lives and property of ordinary people,” added Khatibzadeh.

He added that in recent years, during the Syrian crisis, the Zionist regime has generally played the role of the air force of terrorist groups in Syria, and whenever the Syrian army and allied forces defeat these groups , the planes of the Zionist regime act immediately and carry out aggressive attacks.

He stressed that Iran, while condemning these aggressions committed by the Zionist regime, insists on the need for an appropriate and decisive response to these aggressions, both on the battlefield and in international organizations.

Sport is politicized by Canadians

Elsewhere in the press release, Khatibzadeh responded to questions posed by reporters regarding political statements by some Canadian officials regarding the exhibition match between the national teams of Iran and Canada, saying, “The match was coordinated independently by the football federations of the two countries as part of the usual football preparation matches, and the Canadian Football Federation has announced that it is determined to host any purely sporting event to prevent political abuse by anti-Iranian groups well known.

Khatibzadeh added that unfortunately, contrary to their claims, most sports issues have become a plaything of party orientations and political movements inside Canada. The negative positions and comments of the Prime Minister of Canada and a few others indicate the predominance of a purely political and partisan view of all aspects of governance in Canada, and therefore the behavior of Canadian authorities in public is easily played by groups opposition from Iran.

In conclusion, the Spokesperson responded to a question on the recent peace overtures between the Republics of Azerbaijan and Armenia, stating: “The Islamic Republic of Iran supports the settlement of all disputes in accordance with well-established principles known to international law, including respect for the territorial integrity, sovereignty and rights of all residents of the region.