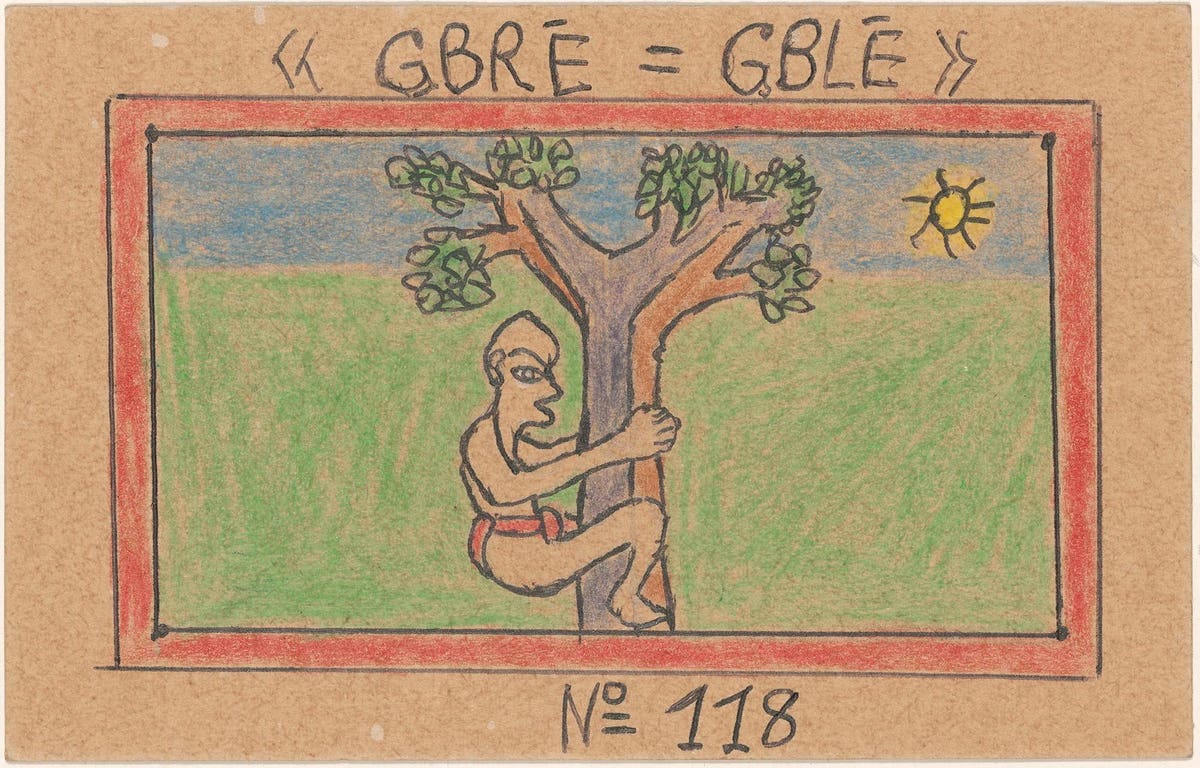 One day in 1952, while visiting a small village in his native Ivory Coast, Frédéric Bruly Bouabré found pebbles that changed his perception of the history of his people. Primed with lectures describing the African origins of Egyptian civilization, Bouabré noticed that the curiously geometric stones resembled hieroglyphics. Assuming he had discovered the fossilized remains of an ancient script, he set out to determine what they meant.

As a clerk and translator in the French colonial administration, Bouabré was widely exposed to ethnography, which suggested to him that the stones could be deciphered by observing the traditional ways of life of his ethnic group, the Bété d’ West Africa. As a self-taught artist, he had the means to represent the Bété environment, from animals and plants to agricultural tools and musical instruments. He associates each of his subjects with a different syllable, based on the sound of his name in Bété. Inspired by the figures he perceived in the pebbles and their resemblance to features of his world, Bouabré discovered – or invented – a means of writing Bété legends and proverbs which until then had been exclusively retained by oral tradition.

The effort occupied much of Bouabré’s life, culminating in a set of 449 hand-drawn pictograms which are the centerpiece of a fascinating and inspiring Bouabre Retrospective at the Museum of Modern Art. Completed in 1991, the Alphabet Bété is a masterpiece of design. Using only colored pencil and ballpoint pen on reclaimed card stock, the artist has rendered a remote society familiar to non-indigenous peoples while simultaneously bringing numiosity to everyday African life. Deeply informed and devoid of ethnographic exoticism, these qualities also animate his depictions of the Bété people and his storytelling illustrations. The work is so visually alluring that you could easily lose sight of its lofty ambitions.

However Bouabré himself was clear about the purpose and potential of his syllabary, as evidenced by his first description, communicated in a letter to the director of the French Institute of Black Africa in 1957. “I discovered signs that seem useful to me. ,” he wrote. “Whoever knows these signs will be able to read my ‘vernacular’, learn it and write it. In addition, he could use it to write in other languages ​​of his knowledge.

The director of the institute, a French academic named Théodore Monod, replied to Bouabré, asking for more details. He received a thick notebook containing 401 hand-drawn symbols, each distilling one of Bouabré’s designs into a simple icon. Together they represented all Bété speech sounds, each based on the principle of the rebus, as evidenced by Bouabré’s meticulous transcription of the Bété aphorisms. The following year, Monod published Bouabré’s work in the official bulletin of his institute. Bouabré used this publication to promote his writing system while continuing to refine it and apply it to oral tradition.

The syllabary was never widely used during Bouabré’s lifetime. Faced with the challenge of learning hundreds of characters, people wondered why his system was necessary when most Bété sounds could be represented with the twenty-six letters of the Roman alphabet. Bouabré had a compelling response, which he articulated in a letter to Monod nearly five decades after their correspondence began. “If I said that the white man does not rule the world, I would be lying,” he wrote. “I am a black man, I was born into this world and there is a race that dominates mine in the field of culture, science. Thanks to writing, you have circumnavigated the earth…. It’s writing that made you who you are.

The Bété syllabary was not only a tool to accurately capture the distinctive sounds of the Bété language and to record oral tradition with phonetic accuracy, but also served as an expression of linguistic autonomy that opposed colonial control. on bete culture. Other indigenous peoples created writing systems with similar motivations, seeking orthographic sovereignty. Some of these writing systems, such as Osage, are widely used today. The world finally understands the sociopolitical insight of Bouabré.

However, there is another level at which Bouabré’s system is useful, which even he may not have fully appreciated, but which is increasingly apparent in the current environment, as humans are increasingly more alienated from nature. Each sign in its syllabary is loaded with traditional ecological knowledge. By developing a writing system based on careful observation of his surroundings, Bouabré has created a means by which this world is preserved and remembered whenever someone writes, whether recording an ancient story or to communicate a new idea.

To appreciate the significance of Bouabré’s achievement, consider the concerns about writing addressed by Plato in the year 370 BCE. In the Phaedrus, Plato tells the story of an Egyptian deity named Theuth, who is said to have invented the letters. Showing his creation to the great god Thamus, divine ruler of Egypt, Theuth boasted that the letters “would make the Egyptians wiser and give them better memories”. Thamus was unconvinced. “Your discovery will create oblivion in the souls of learners,” he replied. “They will rely on external written characters and not remember themselves.”

The truth of Thamus’ perspective only became more evident as two millennia of technological development made writing more efficient. From the printing press to the cloud, we are increasingly able to store what we observe for later memory, increasingly losing direct contact with our knowledge of the world. We lose the ability to react to the changing conditions of the moment – to respond with the wisdom of lived experience – a reactivity possible in oral cultures such as Bété because memories of the past are always present in people’s minds.

Bouabré characters are different from alphabets that have alienated us from our environment because each Bété icon is a mnemonic. Each time a character is written on the page, it evokes an aspect of the West African landscape or the Bété way of life. The world underlies every word. A parallel could be drawn with the double meaning of proverbs present in many oral traditions, which use traditional ecological knowledge allegorically or metaphorically to comment on everyday concerns, repeating this knowledge whenever mundane social conditions arise.

Like the meaning of these proverbs, literacy in the Bouabré syllabary depends on ecological and cultural literacy because the animals and tools depicted in each rebus must be known for the rebus to be intelligible. The act of writing mentally and physically reinforces traditional knowledge, which re-enters the memory each time. Considered in this light, the abundance of bété characters is an asset, not a problem.

Bouabré once said that “writing fights against forgetting”. If Plato had seen writing as Bouabré envisioned it, he might have accepted. (On the other hand, he might not have recognized the mnemonic value, since the “letters” of Theuth would presumably have been hieroglyphs, pictorially evoking life on the Nile. The Egyptians were ahead of their time.) Problems arise when symbols overwrite the experiment and format it for archiving.

To counteract this tendency and reactivate the memory of ecological responsiveness and responsibility, each people and each population needs a set of icons in the image of what Bouabré provided to the Bété. Bouabré was generous in offering his symbols to humanity for use in other languages, but each community must discover its own signs through careful observation of the landscape for these signs to have their full force. This process of collective composition can facilitate everyone’s contribution to ecological knowledge in the here and now – at the pace of climate change – and invest people in its dissemination as knowledgeable participants in its collection. The active use of symbols in everyday life will restore memory to where it belongs: in people’s minds.

Emerging scripts could be integrated into the digital realm by making characters available in Unicode, as the intellectual heirs of Bouabré are striving to do for the Bété. Through digitization, new sharing opportunities can overcome the mnemonic haze of the cloud. Imagine an atlas of proverbs or allegories, each written in the local vernacular of nature. Imagine a planetary lexicon in which local ecological knowledge can be translated and cross-referenced. As environments and people migrate with climate change, wisdom can travel with them. The mnemonic lexicon can become nothing less than a rosette for planetary survival.