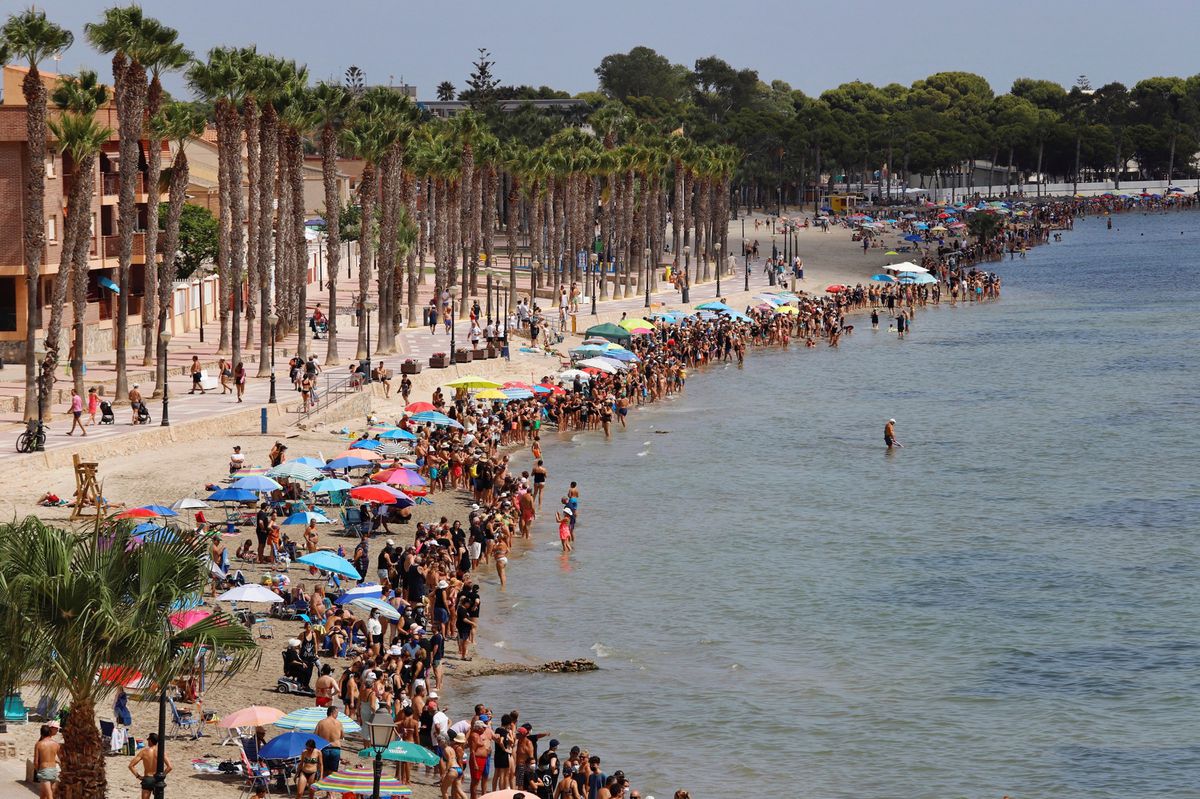 About 70,000 people gathered on Saturday to form a human chain along the 73 kilometers of coastline surrounding the Mar Menor to protest the severe environmental crisis facing the saltwater lagoon of Murcia, in the south-east of Spain.

The state of the Mar Menor in Spain has been in decline for years, but the situation has worsened in the past two weeks with the appearance of nearly five tonnes of dead fish, suffocated from lack of oxygen. A similar phenomenon was observed in 2019, when thousands of fish stranded after being suffocated by the effects of intensive farming nearby.

This time, the crisis is also blamed on the excessive amount of nutrients – nitrates but also phosphates and ammonium – which flow into the 170 square kilometer lagoon, mainly from agricultural fertilizers.

In order to raise awareness of the problem, activists gathered on Saturday morning under the slogan: “Embrace the Mar Menor”. Tens of thousands of people formed a human chain around the saltwater lagoon and observed a minute of silence in a symbolic gesture of mourning for the ecosystem, which is doomed to further degradation if urgent action is not taken. not taken. “It’s a worthy way of saying goodbye to so many animals that have died due to human greed,” said Jesus Cutillas, spokesperson for the coordinating group, Abracemos el Mar Menor (Embrace the Mar Menor) , to the Europa Press news agency.

A sailboat helmed by the environmental group Ecologists in Action also took part in the event. The NGO criticized the “mismanagement” of the Mar Menor and called on policy makers to “put an end to this ecological disaster”. The yacht, called Diosa Maat, tours the most emblematic areas of the lagoon and displays banners demanding a future for the Mar Menor. Environmentalists in action spent the day in the center of the lagoon, near the volcanic island of Perdiguera where they recorded the state of the water. The environmental organization has spent years denouncing the “terrible” state of the Mar Menor and pointed out last week that “thousands of fish and shellfish are dying on the shores of what was the jewel of the regional environment “.

According to Ecologists in Action, intensive agriculture is responsible for the crisis as it contaminates the soil and groundwater with nitrates from fertilizers, which end up in the Mar Menor, causing eutrophication. This happens when there is an excessive amount of nutrients in the water causing the growth of phytoplankton which reduces the amount of oxygen.

“Scientists insist that the biggest problem with the Mar Menor is the massive and constant release of nitrates and the solution is to make sure that 85% of the poison does not penetrate,” Cutillas d’Abracemos el Mar said. Menor.

Cutillas also complained about the lack of response from Spanish political parties, which have engaged in a blame game over who is responsible for the crisis. The central government – a coalition of the Socialist Party (PSOE) and the left Unidas Podemos – has pointed the finger at the regional administration, which it accuses of “years of inaction”. While the Conservative Popular Party (PP), which is in power in Murcia, claimed that the region did not have the necessary powers to resolve the crisis. Meanwhile, protesters called on Spain’s Minister of Environmental Transition Teresa Ribera of the PSOE to ban illegal irrigation and create a fertilizer-free zone.

According to Cutillas, politicians have become vehicles of “public relations” and “must learn to manage things because that is what we pay them for.” In this regard, he stressed on Saturday that scientists are warning those who have the “power” to act for “a long time”.

Urgent responses to the environmental crisis