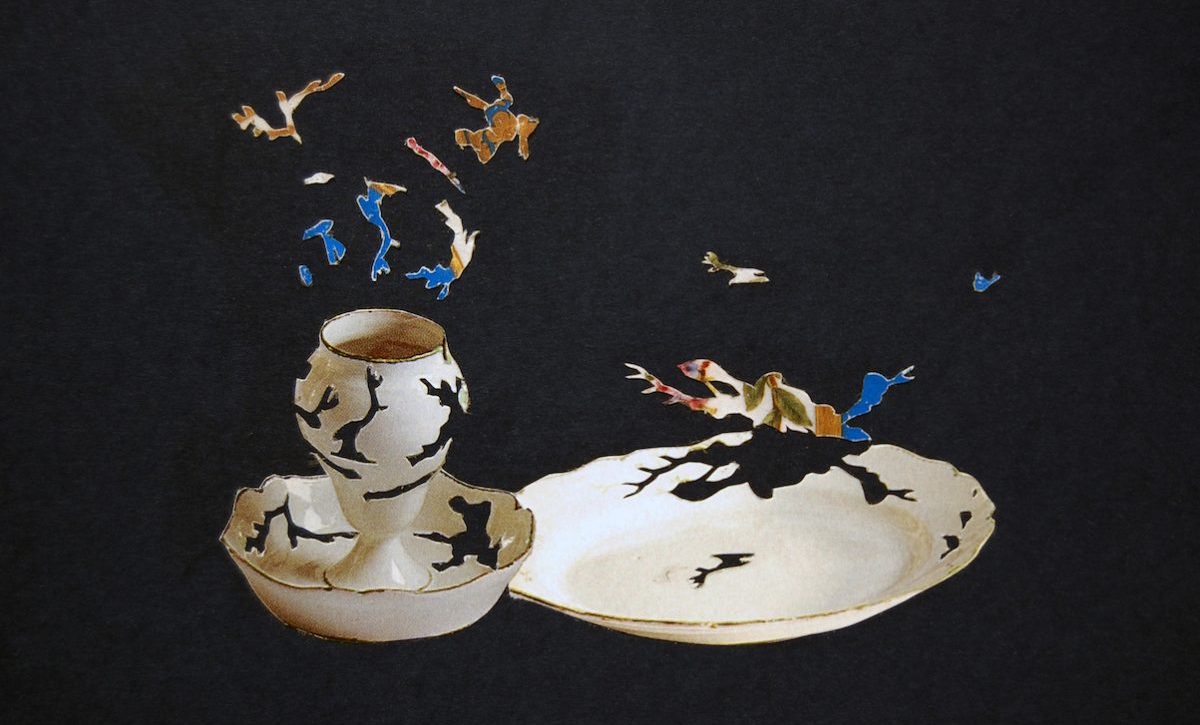 OGDEN, Utah – In my seventh grade English class during a lesson on yellow wallpaper by Charlotte Perkins Gilman, my teacher slipped into the room, scratching the walls. She was oddly good at playing the protagonist of the late 19th-century short story, who is imprisoned by her doctor husband and haunted by visions of a dark woman in the wallpaper.

I spent the rest of the school year enamored and vaguely afraid of my teacher; she was a weirdly behaving woman, a transgressive force in my budding struggle with queer identity.

“I Cry at Nothing, and Cry Most of the Time” by Elizabeth Alexander (2021), the first work in Ideal home at the non-profit space Ogden Contemporary Arts, takes its title from a line in The yellow wallpaper. The reference might have seemed flippant – the piece is made of scraps of wallpaper stuck onto molded paper replicas of household objects – but the work is as unsettling as the story.

Repeating images of tropical plants and animals form a thicket of spiders around a protrusion that looks like a dislocated joint. Above, a relief resembling a trickling fountain with a gently swirling fringe. It’s as if something – or someone – is about to emerge from this cocoon of paper.

Ideal home, which also features vibrant flower arrangements by Kasey Lou Lindley, captures the disorientation of a time when environmental crises pierced the domestic sphere. It’s a contemporary angle on domestic horror – a house violated and exteriorized – but there are also elemental and sublime forces at play.

The centerpiece of the exhibition is a double-sided installation by Alexander entitled “All Things Bright & Beautiful” from 2020. The artist lives in North Carolina, which was “either on fire or underwater” when she began the artwork, according to a statement.

Other hollow paper castings of household objects (chairs, light fixtures, sink) form vertical topographies on either side of a wall, alluding to tangles of overlapping disaster debris. One side is wrapped in vibrant pieces of wallpaper, the other is painted matte black and sprinkled with gold tinsel fragments.

The installation, along with the 6-meter-long Alexander tapestry made from wallpaper cutouts on a nearby wall, evoke startling but increasingly common images of cutaway houses after a natural disaster. The artist asks questions that oscillate like never before between metaphor and reality. What happens to American notions of domestic perfection when our walls don’t hold up? What treasures or terrors were hidden in our now exposed foundations?

On the second floor of the space, Lindley takes on an individually actionable corner of the climate crisis in her poignant series Gardens of the future (2022). A resident of Salt Lake City, the artist studied native plants that could sustainably replace the manicured lawns of the drought-ravaged city. She depicts this water-conserving flora (and similar foliage for that matter) in watercolors, digital collages, and an immersive video installation.

The works are as cheerful and heartfelt as Matisse’s cutouts, but they’re far from simplistic: Lindley flexes some serious compositional muscle as stems, leaves and flowers proliferate and layer. His digital collages come to life in the show’s final room, a four-channel video to soundtrack of children playing and humming in a garden.

As I lay on a pillow among the Lindley projections, another domesticity-themed exhibit came to mind: Woman’s housethe influential feminist art installation and performance space that occupied a ramshackle Los Angeles mansion for a wild month in 1972.

Judy Chicago recently hosted a New Mexico-based sequel to the collaborative work in honor of its 50th anniversary, accompanied by an exhibition of photographs of the original installation. An image of Faith Wilding “Crocheted Environment” was particularly striking, with its trippy web of acrylic yarn and sisal rope that forms a literal and conceptual trap.

Kelly Carper, the Ogden-based curator Ideal home, equally balancing abstraction, figuration and strange materiality to examine the vessels around us. But at the same time Woman’s house extensively explored interiority and confinement, Ideal home must inevitably study the rapidly growing cracks in the walls. For better or for worse, our world is turning upside down.