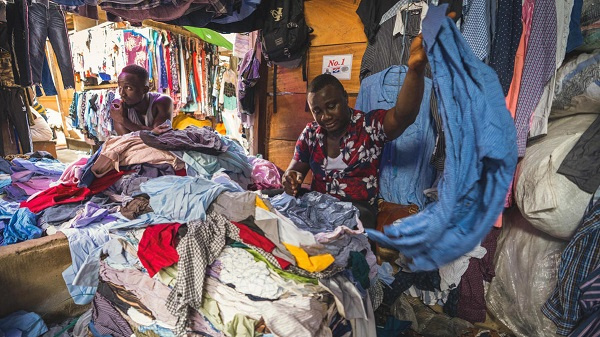 We are greeted with tangled pieces of textiles and abandoned clothes washed up on Korle-Gonno beach in Accra.

These tangled clothes are repeatedly swept along the shores by the changing tides. Closer examination shows that these garments are buried deep in the sand like a new geological formation. “They go up to six feet deep,” said a local fisherman.

“Studies have shown that we have a lot more of this type of textile waste on the ocean floor,” said Solomon Noi, director of waste management for the Accra Metropolitan Assembly. “This poses a significant threat to aquatic life.”

With the ‘muffled dumps’ and ‘limited control’ over exports of unwanted clothes to Ghana, Mr Noi says the management of discarded used clothes in Accra has become a ‘huge burden’ for the city authorities.

“It’s an area that nobody talks about; it’s a real crisis,” he said.

A four-month investigation by Gideon Sarpong has shown that the negative impact of discarded used clothing on Ghana’s environment is fueled by unscrupulous traders and charities, unsuspecting donors and the global fast fashion trade . The inaction of government officials in Ghana and the UK also contributed to this crisis.

Kantamanto – A morgue for used clothes from the UK

Kantamanto, the largest used clothing market in West Africa, is its own market, distinct from many other markets in Ghana. On a typical day, you can expect to hear the sound of vendors jostling for shoppers, with many shouting like “five cedis, four cedis, pants and pants.”

The market looks like a maze, with many rows of vendors selling their wares. There is a covered market hall that spans the surrounding sidewalks. Like a typical western department store, the market also has sections and a general sense of order.

Over the years, Kantamanto – located in Accra’s business district – has turned into a morgue for used clothes from the UK. He is now carrying out the final retail rites before 40% of the 15 million used clothes he receives each week are sent to the graveyard – in suffocated landfills in Old Fadama and surrounding areas in Accra

Landfill at Old Fadama. Old Fadama is a large slum on the outskirts of Accra, Ghana with over 80,000 residents

Samuel Antwi Oteng is a researcher at The OR Foundation, an NGO that focuses on the intersection of environmental justice and fashion development. He explained how the overwhelming amount of used clothes imported into Ghana every week is not sustainable for the people.

“Ghana has a population of around 31 million, so thinking about the ratio of people living in the country to the amount (15 million pieces) of clothes that arrive each week, it shows that there is a big disconnect.”

According to the Accra Metropolitan Assembly (AMA), the textile waste collected in Kantamanto is “the largest consolidated waste stream in the entire city of Accra”.

Nana Amo, an importer and trader of used clothes in Kantamanto market, has admitted the negative impact of used clothes on the environment – describing importing clothes as a “risky” business.

“The ball I’m importing is sealed and I don’t know what’s inside. So if you’re a shopper and you detect there’s unusable clothing, there’s not much you can do but throw it away and make a loss,” he said. “Unfortunately, the improper disposal of these garments means that all of our aligners are choked…with very negative consequences for all of us.”

The UK alone shipped over $70 million worth of used clothing to Ghana in 2020, accounting for nearly 40% of the country’s imports and the UK’s largest export product to Ghana. .

Anyone who donates their clothes to charities in the UK does not understand how charities like Oxfam sell donated clothes to merchants and retailers in countries like Ghana and Nigeria, many of which end up in landfills, the ocean and sewers, and harm the environment.

Ghana’s Minister of Commerce, Alan Kyerematen, did not respond to several requests for comment on the dumping of used clothing in the country and his ministry’s actions to end it.

The fashion industry and the UK government’s inaction

Samuel Antwi Oteng attributed much of the problem to the fashion industry’s business practices, which promote excessive consumption and waste.

“All these fashion brands like Boohoo, Asos, Nike, H&M and Adidas produce excess clothes, more than people need; and so they incorporate waste into their models. But there is a whole business built around donations and buy-back programs, where people and businesses collect these garments, sort them, bale them and ship them to countries like Ghana,” he said. Explain.

In 2019, a UK House of Commons audit report on fast fashion found that fast fashion and its consumption in the UK leave “the bulk of its environmental and social costs” to developing countries. .

“There are too many British fashion companies who recognize the negative impacts of their operations on workers and the environment, but do little or nothing to mitigate the damage they cause,” said Dr Mark Sumner , senior lecturer in sustainability and fashion at the University of Leeds in a statement to the UK parliament.

Despite the environmental damage faced by many companies due to fast fashion, the UK government, following the publication of the audit report on ‘Fixing Fashion’, rejected recommendations made by a political cross-party committee to regulate the supply chain. This included the government saying it would not consider improving the collection and sorting of clothes until 2025.

The report urges the UK government to put more pressure on brands and retailers to take more responsibility for the global disposable clothing epidemic, including by imposing a tax on fashion manufacturers and requiring fashion stores to with high incomes meet mandatory environmental standards.

Globally, the fashion industry is responsible for about 10% of all greenhouse gas emissions according to the United Nations, and it consumes more energy than the international industries of aviation and shipping combined.

According to Greenpeace researcher Madeleine Cobbing, most clothes are not designed to be recycled.

According to her, most clothes are “mixtures of synthetic and natural fibers that are difficult to recycle; while the huge volumes of fashion bought and thrown away prevent any meaningful attempt at circularity”.

Boohoo and some other major UK fashion companies are currently being investigated by UK competition watchdog the Competition and Markets Authority for possible ‘greenwashing’ following concerns about how the company’s products are marketed as environmentally friendly and sustainable. not the case.

However, Frank Egleton, Boohoo’s Corporate Affairs Manager, insisted in an email that: “10% of its cotton used comes from ‘Better Cotton’ farmers who grow cotton in a way that respects people and the environment, and improves livelihoods”.

Unemployment, the used clothing trade and the Ghanaian government’s inaction

Meanwhile, in Ghana – where restrictions on the importation of used underwear have been in place for more than three decades – the government has failed to significantly stem the flow of such used clothing. A recent report by Ghanaweb showed traders openly selling the banned underwear in Kantamanto, despite the potential harm to customers and warnings from health experts.

Faced with one of the highest youth unemployment rates in the region, at nearly 40%, the government ‘risks incurring the wrath of informal sector workers’ if it imposes a comprehensive ban on used clothing , said trader Nana Amo.

The second-hand garment industry directly employs over 35,000 people in Ghana.

Samuel Antwi Oteng argues that the problem of used clothing imports in Ghana – which dates back to the 1960s – is very complicated and needs to be tackled at many levels, including cultural and socio-economic.

He said: “Sometimes when we discuss this issue, we focus too much on a complete ban; but there are so many layers. We have to look at past influences and how colonialism has influenced us. How politics affects it and how the neglect of the informal economy influences it.

“If you think about the Kantamanto market, it’s not like the current president or the previous ones created those jobs for the people there. The people who work there have created these jobs for themselves,” he added.

When designing any sustainable solution, Samuel recommends: “We need to include the second-hand community itself in the conversation. Thinking about the unemployment situation in the country, what other opportunities are there if people want to leave the profession? »

For Solomon Noi, whose responsibility it is to ensure that Accra always remains clean, the solution lies in a production tax and strict enforcement of textile standards.

“We have to have the responsibility of the external producer, so right from the manufacturer, I think there should be a certain percentage of cost that has to be slapped on the product for disposal at its final destination,” he said. declared.

Ghana, he argued, should “toughen up” its laws so that we are forced to abide by “tough standards”.

“Below a certain minimum quality standard, textiles must be rejected.

“If that can’t be done, then Europeans should rather get rid of used clothes in their country, they have the technology for that, than bring them here. [Ghana].”